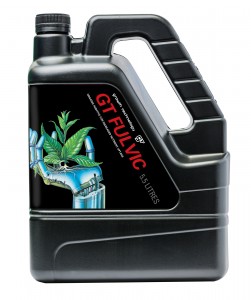 What is fulvic acid exactly?

Fulvic acid is a black powder mined from peat and coal deposits. It is in fact a mixture of several acidic organic chemicals and not just one compound. Fulvic acid is biochemically active and has some effect on plant growth and development. The chemicals are the products of decay from plants that lived millions of years ago. GT Fulvic is a concentrated water based solution of fulvic acid. It needs to be diluted before use.

What does it do then?

The main benefit of putting GT Fulvic into a hydroponic nutrient solution is that it increases the uptake of mineral nutrients by the plant. This is of great benefit to the plant and produces several effects including enhanced cell growth which naturally leads to increased plant growth.

Fulvic acid also increases the rate of transportation of minerals within the plant. Cell membrane permeability to minerals is increased and cell division is stimulated.

How does it do it?

OK, how do I use GT Fulvic?

What about dose rates?

Fulvic acid is most effective in the concentration range between 50ppm and 125ppm in the nutrient tank.

How often should I dose the tank?

Add GT Fulvic whenever a fresh tank of nutrient is made. With recirculating systems, GT Fulvic should be added each week. Run to waste systems only need GT Fulvic once when the nutrient solution is made.

GT Fulvic is not dangerous, however good practice indicates care should be taken whenever we use chemicals.

What should I expect from using GT Fulvic?

The chelating effect of fulvic acid will produce higher mineral levels in the plants with benefits to plant growth, yield and plant health.